Showing posts from December, 2020
Show All

Get Your  Airline Ready ViSume [Video Resume] [New Normal Post Covid19] Looking for a Job in Airline In the Year 2021 Get Your  Airline Ready ViSume [ Video Resume] https://bit.ly/3nfOOPm Here are Basic Tips to Get Your  Airline Ready Video Resume  [Good for Non-Aviation Jobs as well] Write a Small CV Script.  First Things First: Do not wing it up. Make it very Relevant.  Just like a Paper Resume, your Video Resume must be Specific to the Job Roles Keep it Short. HRs  are very busy People. ... Get Creative. ... Make Innovative Make it Professional. ... Collect Feedback. Share link on all Social Media Regularly. What should you put in your Video Resume Tell a story. A video resume is a great way to showcase something from your background that's sure to impress the hiring manager, especially if you tell it in the form of a story. Be brief. Be specific. Add a call-to-action. Share your ViSume, video resume:  For more Airlines Jobs & Aviation Career Information and daily job alerts
2 comments
Read more

How to Join Airline Industry

How to Join Airline Industry       The Aviation sector has been providing numerous job opportunities to graduates in India. In the past, in case of India, there weren’t many courses that focused on the aviation sector and groomed students to take on roles in that sector. Usually, Graduates of any discipline used to apply for aviation jobs. They used to get trained after they were selected after an interview. At present, things have changed! There are many aviation sector oriented courses present, which cater to the needs of the aviation Industry I will list some of the best Aviation field related courses, which students may pursue after finishing either their 12th standard or graduate. Note-  that career prospects and the possibility of landing a high paying job in Aviation sector depends a lot on the quality of the Institute from which you pursue the course. Yes, type of course and aptitude of the candidate also plays a huge role. Make sure that you research well about an Institute/
Post a Comment
Read more 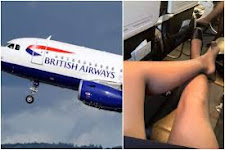 एक ब्रिटिश एयरवेज महिला केबिन क्रू [एयर होस्टेस] ने कथित तौर पर ऑन-बोर्ड 'इन-फ्लाइट एंटरटेनमेंट' की पेशकश की Female Cabin Crew of British Airways  Offers Inflight 'Adult Entertainment', to Passengers On Board https://bit.ly/3g1eoET Spoiling the name of Aviation Industry  An unidentified British Airways Female Cabin Crew  [Air Hostess] allegedly offered in-flight 'Adult Entertainment' to On Board  Flyers, creating an uproar in the Aviation Industry globally. Based on the report, British Airways has now launched a probe in the matter and is seeking to identify the staff member. The Female Cabin Crew [flight attendant] worked as a Paid Prostitute during the flights and the revelations were made public recently by an investigative report published in the British daily. According to The Sun, a spokesman of the British Airways said, "We expect the highest standard of behaviour from all of our Female Cabin Crew and colleagues at all times, and we are investigating
Post a Comment
Read more
More posts