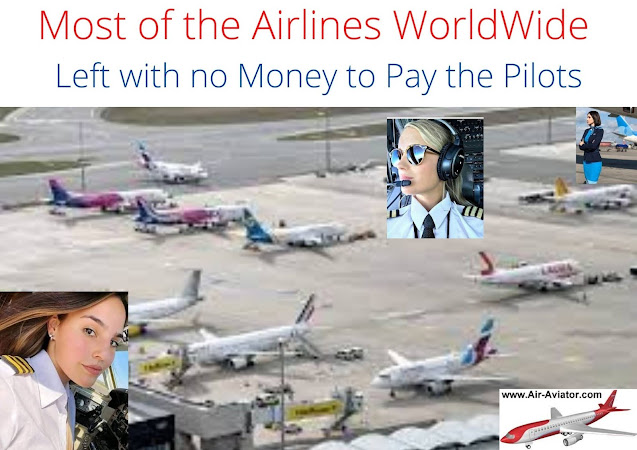 Mostly Paying only Per Flying Hours to Flying Pilots, Rest No Basic Pay

It’s no secret that the Airlines have been struggling. Passenger traffic is down 91% Percent, and last month, It was reported through an analysis that U.S. carriers are losing between $350 and $400 million dollars a day. While the Airlines received government assistance with payroll and other expenses through the CARES Act, that funding runs out at the end of September. Executives have already said that layoffs are inevitable and Pilot jobs are at risk.

COVID-19 a Global pandemic affected the Travel and Tourism industry very badly. Workers working under these industries are now left with nothing. Most of them are losing their jobs and many face a huge salary cut. It was reported from all over the world that “40% of total Pilots already lost their jobs and out of the remaining 60%, 70% got partial work”.

According to analysis around 5 million jobs in Aviation may be lost by the beginning of next year, a 43% reduction from pre-covid levels. After expanding those effects across all the jobs Aviation would normally support, 46 million jobs are at risk. These jobs roles also include highly skilled Aviation roles, the wider Tourism jobs impacted by the lack of Air Travel and employment throughout the supply chain in construction, catering supplies, professional services and all the other things required to run a Global transport system.

Around 60% of Tourists arrive at their destination by Air and the stop in Air traffic has created a massive negative effect on that industry as well. Over $631 billion in reduced GDP benefits from Air Travel-related Tourism will be matched with 26.4 million jobs lost. But Tourism in a wider sense is also very hard-hit, with analysis suggesting the pandemic could translate into a drop of 850 million to 1.1 billion international Tourists and a loss of $910 billion to $1.2 trillion in export revenues from Tourism, putting 100 to 120 million direct Tourism jobs at risk.

It was very emotional to hear Qantas Pilots run busses on the US street. With so many Qantas Pilots not currently having work, at least 13 Qantas Pilots have transitioned from Airbuses to… well, regular buses. According to the interview with two Qantas Pilots, talking about their journeys.

One was a Qantas A380 Captain who delivered the first ever A380 12 years ago, which was a highlight of his career

One was a Qantas A380 First officer who flew the last A380 Flight back from London; he talks about how he felt emotional, knowing it might be the last time he Flies the plane

Both of the Pilots flew a Qantas A380 into the Mojave Desert several months ago for long term storage, noting how surreal and emotional it was

We can't help them in this situation. The A380 captain talk about his experience Flying the Airplane to the Mojave:

“I think going to the Mojave was probably one of the most difficult things, you know, taking that first Aircraft that I delivered to the desert. And it’ll probably stay there, won’t come back, we all cried. You know, there’s 10 A380s parked in Victorville, parked in the dirt, the tumbling tumbleweeds being blown by the wind. Then you pan away from our 10 Aircraft, and there’s 700 or 800 Airplanes.”

This pandemic made all of us helpless. I hope the whole world is able to get over this situation very soon. And everything is back to normal.

Most of the Airline's WorldWide left with no Money to Pay the Pilots Mostly Paying only Per Flying Hours to Flying Pilots, Rest No Basic Pay  @Bhawana Aggarwalfrom IIM Sambalpur    https://bit.ly/3fMO55o